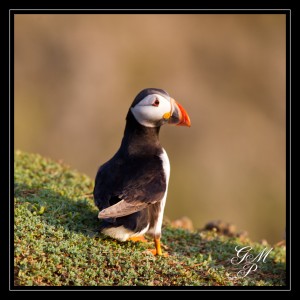 Atlantic Puffin in the evening light

At this time of the year the Island is full of Puffins and Manx Shearwaters that have returned to the island to breed.

No one actually knows where the shearwaters go after they have left the Island and to some extent the same is true with the puffins.

The Puffins and Shearwaters either use Rabbit burrows or dig their own where they lay their eggs and hatch their young. During July the adult puffins are out fishing for sand eels which they bring back to their chicks.

The chick is called a Puffling and unlike the parents they don’t have the brightly coloured bill and has soft downy plumage. They regularly come out of the burrow where they flap their wings in preparation for when they fledge. 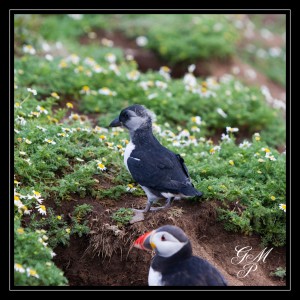 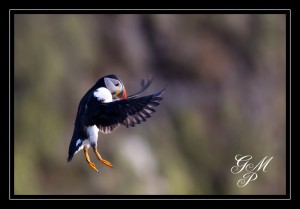 As they approach the island Lessar Black Backed Gulls swoop at the incoming puffins to try and make them panic and drop the sand eels. The gulls are also joined by Jackdaws as well as herring gulls which means for the puffin they have to dive and swoop around to outwit the gulls etc.

Approaching the island they will circle a number of time in “dummy runs” until they think they have a clear landing as near to their burrow as possible. At the last minute they will swoop down before performing a “stall” and then diving into the burrow.

Normally the puffins are friendly with each other but sometimes they pick a fight with one of their neighbors. It appears to be fairly aggressive but they don’t seem to harm each other. 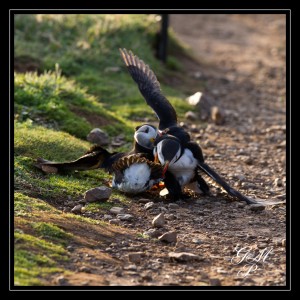 There is no doubt about it but if you like seabirds then Skomer Island is the place to go.